Forgotten Realms Wiki has an article about: Tieflings 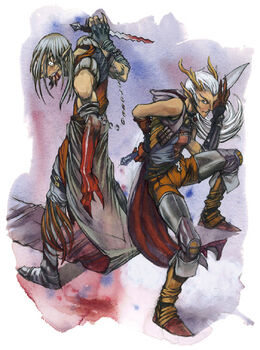 Carrying the very taint of evil in their forms, and perhaps their very souls, tieflings are often persecuted and feared throughout the planes. Because they are descended from evil outsiders, those who know their ancestry immediately consider most tieflings evil and untrustworthy. Not all tieflings are evil or untrustworthy, but enough are that the prejudice tends to cling.

Some tieflings have a minor physical trait suggesting their heritage, such as pointed teeth, red eyes, small horns, the odor of brimstone, cloven feet, or just an unnatural aura of wrongness. Those descended from an infernal minion often carry a birthmark of the deity's holy symbol or another trait related to that evil faith.

Level adjustment: +1. Tieflings are slightly more powerful and gain levels more slowly than other races. It will take more experience for a tiefling to reach level 2 than it would for normal races, for example.

Favored class: Rogue. A multiclass tiefling's rogue class does not count when determining whether he takes an experience point penalty for multiclassing.

Retrieved from "https://nwn2.fandom.com/wiki/Tiefling?oldid=54849"
Community content is available under CC-BY-SA unless otherwise noted.