Forgotten Realms Wiki has an article about: Spirit shamans

Spirit Shaman is a base class that was introduced in Mask of the Betrayer.

Master of the spirit world, the spirit shaman follows a different divine tradition from that of the cleric or druid. Her world is filled with powerful, living spirits, some helpful and some malign. By bargaining with these spirits, the spirit shaman gains power over the natural world and mighty divine magic with which to aid her comrades or smite her enemies. Creatures that are considered spirits include fey, elementals, and incorporeal undead such as wraiths and shadows.

Spellcasting: Divine (Wisdom-based, no need for spell preparation). Must have a Wisdom score of 10 + the spell's level to cast a spell.

Special: Charisma-based for spell DC only. Caster's Charisma ability score, not Wisdom is utilized in determining the DC of attack-based spells.

Many of these abilities will not work against some spirits pre-MotB expansion, as these creatures have still not been properly identified as "spirits". Also most Spirit Shaman special abilities such as Spirit Form, Spirit Journey, etc are not instantly activated but must be cast and are subject to the normal Concentration checks and provoke Attacks of Opportunity outside of Defensive Casting Mode.

All spirit shamans have a personal spirit guide. This incorporeal entity grants the shaman the Alertness feat automatically.

Spirits (even if incorporeal) within a 30’ radius of you take 1d6 Burst Damage per Class level (Will save for half, DC is Charisma-based). Usable as a standard action, 3 + Charisma modifier times per day. This ability is very similar to the cleric ability Turn Undead but is not considered the same for the purpose of feat prerequisites.

Note: Chastise Spirits does not distinguish between friendly and hostile spirits - a bug, mostly likely.

Usable at will as a spell-like ability. Same as Detect Undead, but applies to spirits (spirits appear as yellow dots in the mini-map).

Blessing of the Spirits[]

Usable at will as a Spell-Like Ability. As Protection from Alignment (self only), except it applies to spirits and has a duration of permanent (may be dispelled).

A spirit shaman’s spirit guide helps her maintain control of her mind. At 5th level, if a spirit shaman is targeted by a mind-affecting spell or effect and fails her saving throw, she can attempt it again immediately at the same DC. She only gets this one extra chance to succeed on each saving throw. This ability does not stack with similar abilities granted by other classes the spirit shaman may have.

The Spirit Shaman ignores any concealment or miss chance effects when fighting enemy spirits. Note that this ability will not work against any other creature with concealment.

Warding of the Spirits[]

Usable once per day as a spell-like ability. As Magic Circle against Alignment, except it applies to spirits and has a duration of 10 minutes per level. Warding of the Spirits does not stack with Blessing of the Spirits.

At 9th level, the spirit shaman gains the ability to become temporarily incorporeal once per day, gaining a 50% concealment bonus for 5 rounds. The spirit shaman can use this ability twice per day at 15th level, and gains another use every 5th Spirit Shaman level thereafter.

At 11th level, the spirit shaman gains the ability to restore life to the recently deceased once per day. The effect is similar to the Raise Dead spell.

At 16th level, the spirit shaman can choose to strip all spirits within 30 feet of herself of their defensive abilities by expending a daily use of her Chastise Spirits ability. When a spirit is weakened, it loses its spell resistance, any damage reduction, and any miss chance or concealment effect it may have. This weakening effect lasts for 1 round plus 1 additional round for every 3 spirit shaman levels. Spirits that make their Will save (DC 10 + spirit shaman level + Charisma modifier) are unaffected by the weakening effect.

Note: Weaken Spirits does not distinguish between friendly and hostile spirits - a bug, mostly likely.

Favored of the Spirits[]

At lvl 19 you gain a contingency effect that activates a Heal if your hit-points or ability score drop to 0. The effect can only be activated once per day. This ability works against instant death spells which inflict damage, such as Weird, Vampiric Feast, etc.

At 20th level, the spirit shaman becomes one with the spirit world. She gains damage reduction 5/cold iron, a +3 resistance bonus to saves against enchantments, and the Low-light Vision feat if she doesn’t already have it. 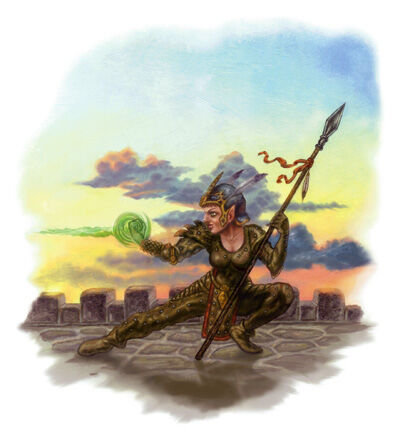 A spirit shaman casts divine spells, which are drawn from the druid spell list.

A spirit shaman need not prepare her spells in advance. She can cast any known spell at any time, assuming she has not yet used up her spells per day for that spell level. She does not have to decide ahead of time which spells to cast.

Spirit shamans can also use metamagic feats instantly when choosing spells to cast, much like a Sorcerer.

The spirit shaman enjoys optimum functionality when using metamagic feats. A level 18 spirit shaman with the Silent Spell amd Empower Spell metamagic feats, for example, may use the Ice Storm spell (good damage, no save) a total of 18 times. Metamagic spells also help the shaman deal with high-save opponents, allowing her to "spam" powerful offensive or defensive/support spells.

The spells Magic Fang; Magic Fang, Greater; Jagged Tooth and Nature's Avatar will work on any animal allied to the caster (even summoned ones), but the spells Awaken and Heal Animal Companion will only work on an animal companion. A spirit shaman should avoid the latter two spells unless she plans on taking druid or ranger levels.

Community content is available under CC-BY-SA unless otherwise noted.