Safiya (female true neutral transmuter/red wizard) is a companion in the Mask of the Betrayer campaign.

"By almost any standard, Safiya would be considered beautiful - golden-skinned, her features delicate, with dark, almond-shaped eyes. Yet her bald head and graceful tattoos mark her as a Red Wizard of Thay, and for this, most outside her homeland would regard her with fear. Her smiles are shy, when they appear, as if she is unused to them - but you sense a resilience beneath, born of an unforgiving land..."

Safiya starts at level 17 with STR 9, DEX 15, CON 14, INT 19, WIS 11, CHA 14. Safiya is specialized in transmutation, much like Sand. As a transmuter, she is dedicated to building and shaping objects, and so she already has most of the crafting feats and already has considerable skill points invested in craft alchemy and craft weapon skills. She also comes with an enchanter's satchel and shaper's alembic, allowing portable crafting.

Safiya is the only companion with a prestige class, though as she already has 10 levels of Red Wizard, she can only continue to level as a wizard. Her extra specialization in Transmutation through both classes means she's restricted from both Conjuration or Illusion.

Mask of the Betrayer[edit | edit source]

Safiya is an instructor at the Academy of Shapers and Binders. Her mother, Nefris, is the headmistress of the academy. In contrast to most Red Wizards, Safiya has little interest in power-grabs like the other "despots" of Thay, instead focusing on her scholarly pursuit of the arcane arts. She enjoys building constructs and using transforming magics, and is very fond of Kaji, her homunculus familiar, one of her earliest creations. 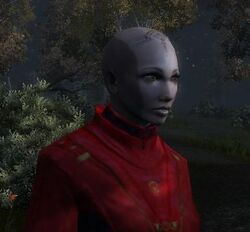 Safiya was told by her mother to travel to the Bear God's Barrow in Rashemen, retrieve the PC from the lower barrow and protect him/her from harm and take the player to see Lienna in Mulsantir. She was not told the full extent of why the player was buried in a cave, only that he/she would be there under binding runes. She was astonished that this person was from the Sword Coast, with a open cut in the chest, and claimed a weapon shard was in there.

They climbed out the barrow, and were confronted by a wolf spirit named Nakata, who was disturbed by the spirit eater's revival. The dormant hunger flared and an incarnation suddenly devours the telthor, which seemingly healed the chest wound completely. Safiya did not know what to make of this....or anything else about the person's current state. Nearing the exit, Safiya began to experience sudden auditory hallucinations, but passed it off as the effects of the spirits. However, Okku had awakened and wasn't planning on allowing the PC or Safiya to leave the barrow. The bear god called in telthor minions and was seemingly banished by the two after a fight.

Arriving in Mulsantir, Safiya disguised herself as a peasant due to the fear the Rashemi have of Red Wizards. They arrived in the Veil Theater, only to find it under attack by a group of Red Wizards. There, the leader of the attack, Khai Khmun, spilled all the details, claiming he was ordered by Araman to kill Lienna and eventually Safiya, and gloated over the fact that Nefris was slain. Enraged, Safiya and the player finished them off. Lienna, now a charred skeleton apparently by her own hand in the shadow Veil, was a dead-end. Safiya was crushed by the possible death of her mother, and decided to fulfill her last request by protecting the PC.

They soon learned from the wychlaran Sheva Whitefeather that Okku arrived at the gates with the spirit army, and is now out for their blood. Safiya deduces that the witches are detaining the Veil Theater actors during this situation, and they will need to deal with the angry bear god - again - before they can hope to learn more about Lienna's activities.

After (potentially) recruiting Gannayev-of-Dreams and Kaelyn the Dove, they faced the spirit army. When Okku yielded in defeat, the hunger re-emerged, and the player must either give in or restrain it. Regardless of Okku's fate, he reveals the grim fact the PC is now a Spirit Eater, and is a threat to the land, spirits, and ultimately himself/herself.

In search of answers, the player eventually learned that both Lienna and Nefris visited the Slumbering Coven, and from the sleeping hags that the curse is from the (now dead) Myrkul, a long dead god, and the answers lie in the Academy of Shapers and Binders. Returning to Thaymount, the situation is dire as it is revealed Nefris was indeed dead and many bodies litter the halls, even as classes continue. With the help of Safiya's mentor Master Djalfi, they manage to unlock a mysterious door in the headmistress' tower and discovered a portal to the Astral Plane. Within the infinitesimal void was a god-isle of Myrkul, the only remnant of the dead god. Myrkul revealed that the curse was his punishment to Akachi for the Betrayer's Crusade against the Wall of the Faithless, and revealed Araman was Akachi's brother. He has had a geas on Araman for all these centuries, in order to stop the Acadamy's Founder from ending the curse.

(In the Steam version of MOTB, a variation on this plot is possible. Meeting with Araman before going through the portal to Myrkul's god-isle, with certain diplomatic conversation decisions, Araman admits that he no longer desires to pursue this vendetta. He leaves and the remainder of the Red Wizards attack. This results in the opponents blocking the way to the Founder being identified as Myrkul's followers, not Araman.)

A nearby portal led them to the Founder's sanctum, where Araman was closing in on her. After confronting and killing Araman, they encountered the Founder herself. Safiya initially thought the woman was her mother alive and well, but then realized the truth: she, Lienna, and Nefris were in fact aspects of the Founder. She had created these three daughter aspects out of her soul to help end Akachi's curse, who was now nothing more than faceless hunger. Out of singular love to Akachi, she had the player removed from Merdelain, removed the shard, and placed in the barrow. Safiya's auditory hallucinations were actually a psychic guidance from the Founder, Nefris, and Lienna. Safiya was "all that was best in her" and they kept her safe from Araman.

The Founder gave the player the fully reformed Silver Sword of Gith, stating it will open the Betrayer's Gate to the Fugue Plane, and the solution to the curse lies where it began: the Wall of the Faithless, where the player's soul was displaced by the curse.

Retrieved from "https://nwn2.fandom.com/wiki/Safiya?oldid=54952"
Community content is available under CC-BY-SA unless otherwise noted.