Try to avoid walk mesh cutters, especially where you can just make areas unwalkable. Unwalkable areas mean less overhead for the engine. Smooth areas mean the pathfinding AI will not get stuck in a nook or cranny. A computer controlled npc stuck in a corner that can't find his way out will cause lag spikes and 100% cpu usage.

Don't leave triangles - try to make the walk path a straight line and keep them off the walls: 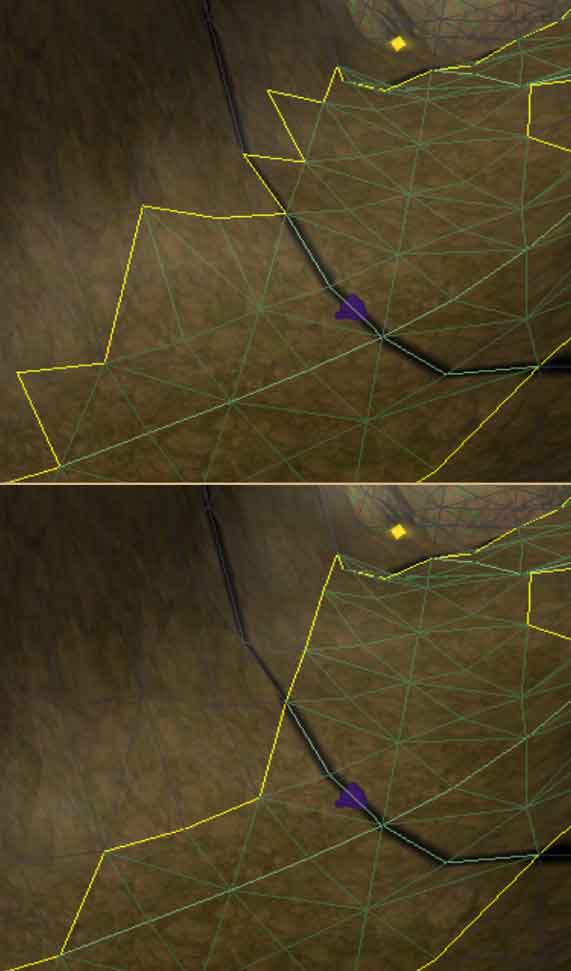 Avoid using a mesh cutter to save 1/2 a square on edges like these. They also slope a bit far down. 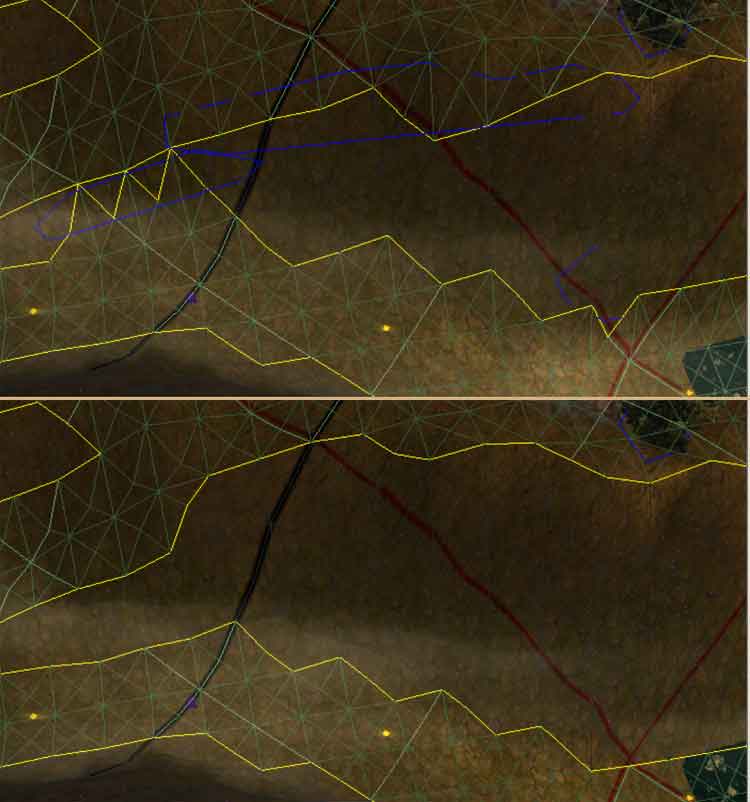 Little corners like this should be avoided as AI controlled monsters could get hung up in there: 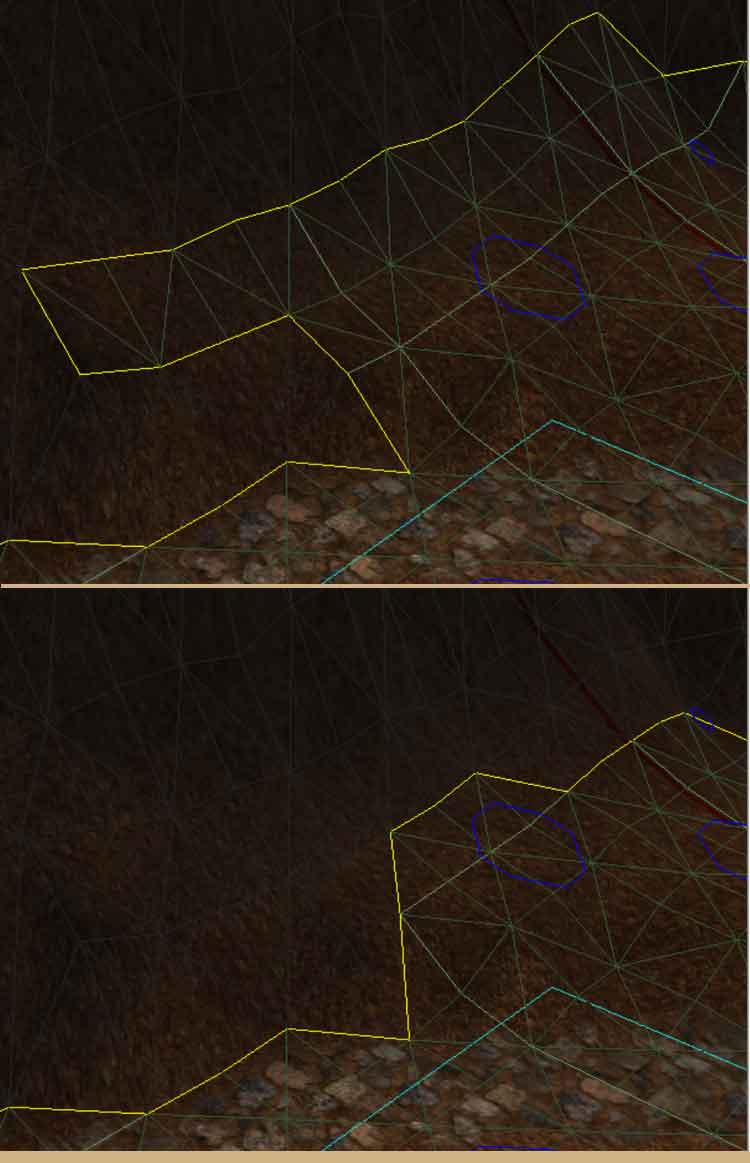 When a character transitions to an area, ensure there is ample room in case other players or npcs are present. It is possible to get bumped into a non-walkable area which results in the player crashing out. Make sure that as a group enters an area and bump each other there is enough walkable area to hold them all. One anecdote describes a player who is in this state and repeatedly crashing as he tries to enter the game, the DM seeing this was able to move him as he logged in right before he crashed and thus was able to let him log in.

triggers with 100+ vertex points have been proven to cause problems. Though having six or twelve vertices is probably ok (no need to have only triangles or squares).

Early on in NWN2, Obsidian had recommended not to exceed a total of four seeds The definition of a seed being the type of tree (example, a fan palm and coconut palm are already two, not one just because they are both palms) AND a seed number. Perhaps since initially prescribing that guideline, Obsidian has made improvements to their engine so that number has increased.

As grass flows with the movement of the wind, it is relatively very resource consuming. Use sparingly.

"I had read about some 6 placeable limit within a tile; It seems it must include trees, environmental objects (and possibly even triggers and encounters with some higher limit). I had a total of

I shifted the small tree on the left one ~ the diameter of its cutter leftward, out of the tile, then it baked fine. I was surprised though as this didn't seem cluttered at all and I felt I was well under the limit.

Sometimes it is the shape of the cutter that is too confusing to the bake. You could have also tried redrawing the octagons into squares and trying again."

"I ended up using quite a bit of lights on the Drow map and learned a couple of things about them in the process, so thought I'd start a thread on this topic that we can add to as we learn more.

Most importantly, regarding lights, keep in mind that by default, they cast shadows, and the more lights and shadows we have, the more we can slow the performance of our clients' machines (and possibly the server). One very good thing to do is to disable shadows. Two ways:

Though being an underground area, it is most natural that the light would be very dim and not cast any noticeable shadows in a place already so dark. So I turned directional light casts shadows to False.

I then used a combination of the Power Bar plugin and the Area Contents tab in order to seek out and group my point lights. Area - select objects - Tag (copied and pasted the tag for my lights here), then temporarily grouped them, right clicked and opened properties in a new window, so that I could disable all of their shadows simultaneously.

I went further, since I had ~80 jail pieces, which are very dark wrought metal pieces, I selected all of these and set receives shadows to False.

Later I went through and read the help manual. It provided one more tip, recommending not to exceed light from more then 3 point lights on and surface. So if you set your Show/Hide selection to show the light spheres, you can see pretty easily where they overlap, and adjust the sizes and locations of your spheres so that you don't have more than three affecting any one surface."

(unless it is a very bright light in an area with a background where shadows should be obvious),

(especially in the maps I am working on more recently, in Underdark where it's already so dark anyways, or, if the object is already very dark in color so shadows wouldn't be real noticeable anyways).