NWN2Wiki
Register
Don't have an account?
Sign In
Advertisement
in: Spells, Evocation spells, Spells with icon,
and 20 more

You create a shimmering projectile of magical force that unerringly slams into a single selected target. After level 1, the spell creates 1 additional missile for every 2 caster levels, to a maximum of 5 missiles at level 9. Magic missiles do 1d4+1 points of magic damage each.

A scribed scroll of Magic Missile will cost 225 gp, CL of the scroll being 9. [source]

This is a defacto low level "always-damage" spell. It sacrifices sheer damage output of similar level 1 spells for range, no save and the magical damage type.

Most mages will have this for a long-ranged attack spell, instead of resorting to crossbows or similar ranged weapons, when they run out of higher level spells. It is also retains some usefulness after level 9 due to it doing enough damage to tip a enemy over the edge into death, with a practical amount of damage which will always succeed. More powerful variations include Isaac's Lesser Missile Storm and Isaac's Greater Missile Storm

Whether or not it is worth taking a lower levels is undecided and up to a matter of preference. Many mages would find it more fortuitous to use spells which caused the enemy to be put to sleep, charmed them, Grease the area to knock down enemies, or lower the targets strength so it cannot move or hit with a melee weapon.

The good notes about this spell compared to other level 1 sorcerer/wizard damage spells is that it has a long range, and always succeeds on hitting and affecting the target. It however cannot affect more than one person, and almost all level 1 damage spells do more damage (or do damage to more objects) than Magic Missile, even though they have saves.

An easy way to become immune to the magic missile spell is Shield which provides a low-duration way of stopping all magic missiles - mages usually have to be aware of this when casting spells themselves!

This is actually a good spell to have (at a reasonably high caster level) on a Scroll, Rod or Wand (and can actually be quite a common wand at most times). It provides a backup to usual spells for adventurers on an item, since it only uses Caster Level, and only for the amount of missiles (and to get past spell resistance)

In 3.5E, magic missile had slightly more utility - it could affect as many targets the caster chose (up to the amount of missiles) in an area, making it what Isaac's Missile Storm is based on in terms of effect. 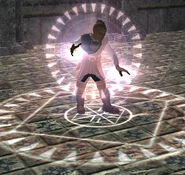