Forgotten Realms Wiki has an article about: Half-orcs 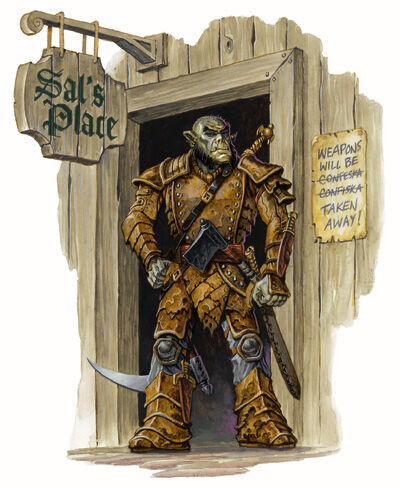 In the wild frontiers, tribes of human and orc barbarians live in uneasy balance, fighting in times of war and trading in times of peace. Half-orcs who are born in the frontier may live with either human or orc parents, but they are nevertheless exposed to both cultures. Some, for whatever reason, leave their homeland and travel to civilized lands, bringing with them the tenacity, courage, and combat prowess that they developed in the wilds.

They would rather act than ponder and would rather fight than argue. They love simple pleasures, such as feasting, boasting, and wild dancing. They are an asset at the right sort of party, but not at the duchess's grand ball. Half-orcs are as tall as humans but their brutish features betray their lineage. They also regard scars as tokens of pride and things of beauty. They rarely reach 75 years in age.

Favored class: Barbarian. A multiclass half-orc's barbarian class does not count when determining whether he takes an XP penalty. Ferocity runs in a half-orc's veins.