Forgotten Realms Wiki has an article about: Favored souls 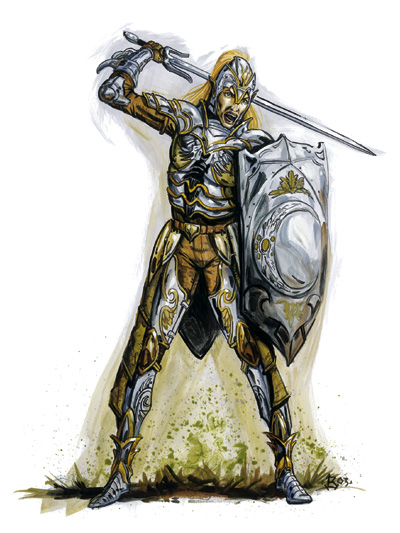 Favored Soul is a base class that was introduced in Mask of the Betrayer.

The favored soul follows the path of the cleric but is able to channel divine power with surprising ease. She is able to perform the same tasks as her fellow divine spellcasters but with virtually no study. Favored souls cast their spells naturally, as much through force of personality as through study. Though this gives them extraordinary divine abilities no normal person could ever match, they see their gift as a call to action, and so in some ways may lag behind their more studious colleagues.

Favored souls cast divine spells by means of an innate connection rather than through laborious training and prayer, so their divine connection is natural rather than learned. Mortals who perform great services to deities, devoting their lives and work to the cause of their god or goddess, sometimes become the Chosen of that deity.

Spellcasting: Divine (Charisma-based, no need for spell preparation). Must have a Charisma score of 10 + the spell's level to cast a spell.

Special: Wisdom-based for spell DC only. Caster's Wisdom ability score, not Charisma is utilized in determining the DC of attack-based spells.

At level 3, a Favored Soul automatically gains the Weapon Focus feat for their deity’s favored weapon.

Note: If your build has high enough Spellcraft and possesses sufficient Prestige Class levels (at least 3) that boost the Favored Soul's Spellcasting level to 9th-level, this can enable a Favored Soul to instead select an Epic Spell in place of another type of Energy Resistance.

At level 12, a Favored Soul automatically gains the Weapon Specialization for their deity’s favored weapon.

At 17th level, a Favored Soul can use the spell Haste three times per day.

At level 20, depending on alignment, the Favored Soul gains damage reduction 10/alchemical silver if lawful, or 10/cold iron if chaotic. A neutrally aligned Favored Soul can choose either type.

Note: In the current patch, 1.12, a Favored Soul can choose between the damage reductions regardless of alignment.

Note: If your build has high enough Spellcraft, the Favored Soul can instead select an Epic Spell in place of one of these two types of damage resistance.

A favored soul casts divine spells, which are drawn from the cleric spell list.

A favored soul need not prepare his spells in advance. He can cast any spell he knows at any time, assuming he has not yet used up his spells per day for that spell level. He does not have to decide ahead of time which spells he’ll cast.

Favored souls can also use metamagic feats instantly when choosing spells to cast.