Forgotten Realms Wiki has an article about: Bards 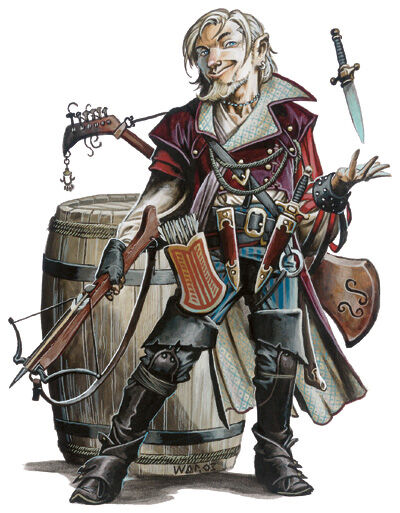 Bard is a base class in NWN2.

A bard brings forth magic from his soul, not from a book. He can cast only a small number of spells, but he can do so without selecting or preparing them in advance. His magic emphasizes charms and illusions over the more dramatic evocation spells that wizards and sorcerers often use. In addition to spells, a bard works magic with his music and poetry. He can encourage allies, hold his audiences rapt, and counter magical effects that rely on speech or sound. Bards have some of the skills that rogues have, although bards are not as focused on skill mastery as rogues are. A bard listens to stories as well as telling them, of course, so he has a vast knowledge of local events and noteworthy items.

Alignment restrictions: Any non-lawful - Bards are wanderers, guided by whim and intuition.

A bard casts arcane spells, which are drawn from the bard spell list. He can cast any spell he knows without preparing it ahead of time. To learn or cast a spell, a bard must have a Charisma score equal to at least 10 + the spell level (Cha 10 for 0-level spells, Cha 11 for 1st-level spells, and so forth). Starting at 8th level, and every three levels after, bards can replace one known spell with a new spell of the same level. The replaced spell must be two spell levels below what the bard can currently cast (1st level spell at 8, 1st or 2nd level spell at 11, 1st or 2nd or 3rd level spell at 14, and so forth). Bards do not suffer from arcane spell failure when wearing light armor. Medium and heavy armor, as well as all shields, still incur the normal failure chance.

* Provided the bard has sufficient charisma to have a bonus spell of this spell level.

* Provided the bard has sufficient charisma to have a bonus spell of this level.

You can identify items more easily than other classes, adding your bard levels to any Lore skill checks.

You can sing songs that can improve morale and mystically enhance the offensive and defensive strengths of the bard and his or her companions. These are constantly active buffs to the party and the bard with specific effects. Only 1 inspiration may be active at any time; and Requires 3 Ranks of Perform.

You can sing a song to help allies and hinder foes. As you progress in level and Performance skill, new songs become available and older songs become more powerful (Bard level/day).

Some songs need to be selected as a general feat when Leveling up; and will be available IF the requirements are satisfied BEFORE leveling up to the availability of that song.

A bard casts arcane spells, which are drawn from the bard spell list. He can cast any spell he knows without preparing it ahead of time. Every bard spell has a verbal component (singing, reciting, or music). To learn or cast a spell, a bard must have a Charisma score equal to at least 10 + the spell. The Difficulty Class for a saving throw against a bard’s spell is 10 + the spell level + the bard’s Charisma modifier.

Like other spellcasters, a bard can cast only a certain number of spells of each spell level per day.

In addition, he receives bonus spells per day if he has a high Charisma score. The bard’s selection of spells is extremely limited. A bard begins play knowing four 0-level spells of your choice. At most new bard levels, he gains one or more new spells, as indicated on Table: Bard Spells Known. (Unlike spells per day, the number of spells a bard knows is not affected by his Charisma score; the Bard Spells Known is a fixed number.)

Upon reaching 5th level, and at every third bard level after that (8th, 11th, and so on), a bard can choose to learn a new spell in place of one he already knows. In effect, the bard “loses” the old spell in exchange for the new one. The new spell’s level must be the same as that of the spell being exchanged, and it must be at least two levels lower than the highest-level bard spell the bard can cast.

A bard may swap only a single spell at any given level, and must choose whether or not to swap the spell at the same time that he gains new spells known for the level.

As noted above, a bard need not prepare his spells in advance. He can cast any spell he knows at any time, assuming he has not yet used up his allotment of spells per day for the spell’s level.